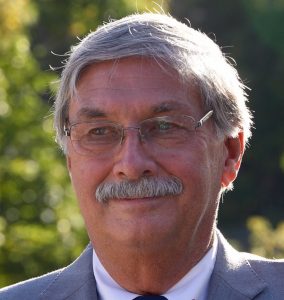 Tom Wells is the founding partner of Wells, Jaworski & Liebman LLP. He served as the firm’s first Managing Partner and guided its growth to its present status as a highly respected firm. After stepping down as Managing Partner, and remained the CFO and one of the firm’s three Administrative Partners. Most recently, he is now moved to “of counsel” status. Tom concentrates his practice in real estate, land use, business, commercial, and non-profit areas. For more than twenty years, Tom has enjoyed an AV (highest possible) Peer Review Rating from Martindale Hubbell national lawyers directory.

As also the owner of a number of business enterprises, Tom has significant expertise in the area of business client representation and complex financing arrangements for real estate development and business working capital. In addition to the law firm, Tom Wells is the Managing Partner of Wells Mountain LLC, a real estate development and management firm with properties principally in the state of Vermont, including five restorations of historic buildings into modern, successful commercial properties with over 45 tenants. Tom is also a “banker”, having served nine years on the Board of Directors of Cascade Bancorp, a Bend, Oregon-based bank holding company, and has recently joined the Board of Beach Community Bank in Tampa, Florida.

Tom also enjoys numerous philanthropic and civic involvements, including over 30 years of active participation in both Rotary International and the YMCA, principally as an Officer, Director and Trustee of the Ridgewood, New Jersey YMCA, and in recent years as a non-Haitian member of the Board of Directors for YMCA d’Haiti. Wells principal philanthropic activity is as the Founder and President of Wells Mountain Initiative (www.wellsmountianinitiative.org) which he founded 13 years ago. “WMI” is a 501(c)(3) qualified charity focused on social change through education and community building primarily in the developing world which at last count had 185 active and a 160 graduate WMI Scholars (up from just one in 2005) studying in 42 countries, mostly in Africa. WMI is also particularly active in Haiti where Tom spearheaded the construction and development of six Container YMCA Community Centers built from former shipping containers utilizing a unique award-wining design.

Tom is a graduate of Bucknell University, where in 2016 he received the Distinguished Citizenship Award, and of Case Western Reserve School of Law. He is admitted to practice law in New Jersey, Vermont and Ohio and in various District Courts. He is a former member of the Bergen County District Ethics Committee.

Tom presently divides his time between homes in New York City, St. Thomas, U.S.V.I., and Bristol, Vermont. He maintains offices in Vermont, as well as Paramus, New Jersey. Tom and his wife make their fourth “home” at their latest project. He is creating a 20 acre “family compound” on Lake Champlain in Vermont. Tom and Carol are proud parents of three daughters and a grandson.

Is Your Non-Profit Well Run?

Non-profits come in all sizes. Many of the largest employers in any given area are legally non-profits...consider area hospitals and ...
Read More

Private Foundation or Donor Advised Fund…Which Way Should I Go?

Have you done well enough that you are thinking of making a substantial gift to charity? For those seeking philanthropic ...
Read More

Is Crowd Funding Right for Your Non-Profit?

In years past, if you had a good idea, whether it be for a for-profit venture, or more relevant to ...
Read More

Experts are telling us the recession is over, and it very likely is, at least by the numbers. Eight months ...
Read More

An exciting new concept was recently born in the State of Vermont, where our firm also has an office. Vermont ...
Read More

Not much! At first blush, this is the clear answer to this question. That is, unless your credit is not ...
Read More

We have the good fortune to represent a number of the area's premier financial institutions including Hudson City Savings Bank, ...
Read More

Lawyers & Banks Working Together (to help you!)

I can almost see you shaking your head at the headline. Do you have a good relationship with your lawyer ...
Read More

"Business succession" are words, that when properly understood, leave many an able business person trembling in anticipation, and in many ...
Read More

Subscribe to our Legal Update newsletter for great tips on topics like estate planning and tax savings, and thought-provoking legal articles!